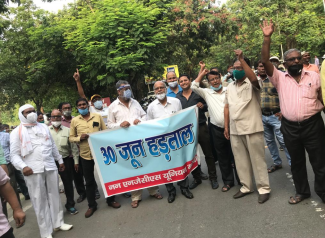 AICCTU congratulates and salutes the workers of Steel sector for making a big success of the one day strike today (June 30) in all plants, as well as in related mining areas, throughout the country demanding conclusion of long pending wage revision and withdrawal of the policy of disinvestment and privatisation in steel sector. The strike was 80 to 100 % successful, with young and new workers taking a leading role in organising the strike.

AICCTU condemns the role of local administration and police for causing disruption of strike in several plants, including lathi charge on striking workers. Despite SAIL being the first among the PSUs to extend helping hand to fulfil oxygen needs amid the tough time of pandemic crisis, the Modi government, on the one hand, is denying  workers their legitimate rights and hard-earned income, and on the other, is hell bent upon converting the ‘crisis into an opportunity’ for its corporate friends by privatising Steel, Railways and other PSUs and also by offering national resources and assets on a platter to private hands. The strike is a befitting response to the anti-national, anti-worker policies of the Modi led BJP government.