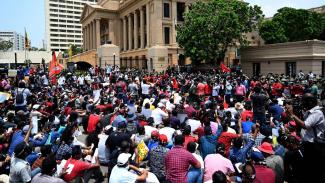 The General Strike and After

Resistance by unionized and non-unionized workers has played a significant role in the ongoing mass protests in Sri Lanka. Increasing immiseration of the working classes – the majority of whom are non-unionized – due to neoliberal policies –– is a factor behind the outburst of popular protests. The existing unions have thrown in their support behind the protestors and have synced the mass demand for President Gotabaya Rajapaksa’s resignation.

Within a few weeks of the spontaneous outburst of the demonstrations, over 1000 trade unions held a day long general strike. This took place on 28 April and brought the country to a standstill. Essential services had already been severely affected by the economic crisis and hence the trade unions made sure that these were not hampered. This protest helped to intensify the movement. Following the violent attacks by Rajapaksa loyalists on 9 May, trade unions once against initiated a week of protests.

During the 28 April general strike, Channa Dissanayake, president of the Ceylon Bank Employees’ Union, explained the situation in the following words:

“What began as an economic breakdown became a political breakdown, and now has become a social breakdown. The newly appointed governor of the central bank has temporarily halted debt servicing. Although no one wants to say it, what this means is that we are bankrupt. What is there left to talk about? We absolutely need a reformation.”[1]

The participation of workers has increased the strength of the movement in terms of numbers. Striking workers have also strengthened the emphasis on structural change in addition to the demands for short-term political and economic solutions. While a precise program of structural transformation is yet to be articulated by trade unions and other democratic political forces, there is an increasing realization among sections of protestors that the current crisis is deeply rooted in long-term political trends and economic policies.

The Sri Lankan state’s victory over the LTTE led to a renewed triumph of Sinhala nationalism. Since 2009, the Rajapaksa brothers have ridden heavily on the back of Sinhala pride to consolidate their power. This led to a normalization of heavy military expenditure. The Tamil genocide allowed the Rajapaksa brothers to position themselves as champions of the Sinhalese middle classes, who were also full of glee about the “development” work done by the government. This allowed the ruling regime to remain in power despite several earlier warnings that an economic crisis was looming on the horizon.[3]

There is now a growing conversation within the movement about heavy military expenditure as a key cause behind the ongoing crisis, about the long-standing state repression of Tamils and Muslims.  On 18 May, a special remembrance event was held at the Galle Face Green in Colombo to remember all those who were killed/forcibly disappeared in the civil war in 2009. A special commemorative event was also held in Mullivaikkal in the North of Sri Lanka where the last phase of the war took place.

Alongside issues of ethnic nationalism, state repression, rights of minorities, neoliberal economic policies have also been questioned by sections of protestors.  Neoliberalism has been the normal in Sri Lankan policies since the late 1970s. In more recent times, the country has witnessed a slew of “reforms”. From greater trade liberalization to budget cuts to social welfare, all have been justified by citing an ensuing debt crisis caused by the previous regime’s accumulation of loans for mega infrastructure projects.[4] Neoliberal policies have not saved the island from the crisis though.

Sri Lankan workers have been vocal against unequal economic policies over the last decade. There were massive protests in 2011 in the Free Trade Zones against the Private Sector Pension Bill.[5] Protests against the Adani port project in Colombo in 2020 had made news in India.[6] Last year, workers protested the wage cuts and job losses that followed the lockdown.[7] Thus, even though a powerful workers’ movement is absent in Sri Lanka, working classes have been politically alive and active and are now strengthening the current protests.

One wonders whether trade unions, left parties and other organizations representing the working classes will be able to drastically influence the ongoing movement.[8] For us though, this process of trying to integrate workers’ issues and demands for structural change into the mass movement, is interesting and important.

In policy terms, it has been argued, that India should learn lessons from the Sri Lankan crisis.[9] There are things for us to learn from the protests as well, as we try to build a united front against fascism and simultaneously strengthen movements for structural change. Our opponents are also similar: pro-corporate development models, ethnic supremacist nationalism, and a deadly combination of these.

The Government of India has once again taken the big brother approach, dishing out loans to Sri Lanka and acting as a savour. The loan is a welcome measure, but this also needs to be seen as part of a foreign policy that looks to strengthen neoliberal alliances in the neighbourhood. It is therefore important for us to think what a pro-people foreign policy can look like, globally and in South Asia.

For a deep and meaningful political engagement with the Sri Lankan protestors, we also need to alter the nature of our engagement with the Sri Lankan society. In our popular culture, the Sri Lankan cricket holds an important place, while the Tamil genocide becomes the backdrop for thrillers and films. Beyond these, Sri Lanka as a country that hardly holds a place in our cultural imagination, but for emotional bonds of Tamils towards their counterpart in Sri Lanka. These protests are an occasion to change that, and in the process, we can strengthen the engagement between democratic political forces in India and its neighbouring countries. 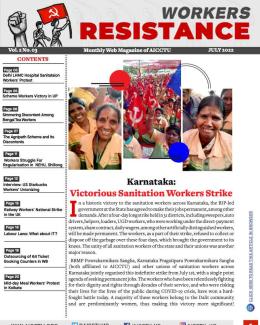 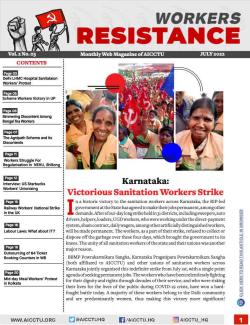