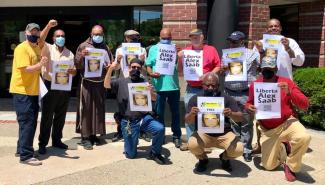 Steve Gillis is an elected member of the executive board of the Boston School Bus Drivers Union (United Steel Workers/USW Local 8751). He has been a school bus driver for 37 years, elected President of the union for 3 years in 2003, served as Vice President for 6 years and Financial Secretary for the last 6 years. Tamarai is in conversation with Steve Gillis on COVID-19 pandemic - the way the union braced itself up for the emergency, its demands during the pandemic and struggles to achieve it, the historic agreement it signed, the union’s voluntary service and assistance to the communities; its natural tendency to demonstrate international solidarity against capitalism and imperialism and thoughts about struggles in India.

Can you give us a brief history of Boston School Bus Drivers Union?

The union has its origins in the civil rights movement in the U.S - the struggles against systemic racism and for equality, which manifested in the movement for desegregation of schools and quality education in Boston in 1960s and 70s.

US District Judge Arthur Garrity ruled in favour of Black and Latinx parents in 1974 to desegregate Boston’s racially unequal public schools, ordering the busing programme for African American and Latinx students to schools outside their neighborhoods.  Schools in Black neighbourhoods were poorly funded and offered substandard education. The busing programme started on September 12, 1974, to commute thousands of African American and Latinx children to better funded schools in White neighbourhoods aimed at correcting the gross inequality in access to education. However, massive protests and attacks erupted when Black children tried to enter the schools in the White segregated areas. Counter protests and huge demonstrations were organized by socialist organizations and progressives opposing the violent racist attacks on children commuting in school buses.

Against this background, school bus drivers started to organize in 1974. The Workers World Party (WWP) along with the militant rank and file won the right to form union in 1978 and became part of United Steel Workers (USW). Boston School Bus Drivers Union has 1000 members at present. The workforce comprises 85% male and 15% female and about 90% of them are from Haiti and a significant minority is from the African country Cabo Verde.

The COVID-19 pandemic caused immeasurable suffering to people in Boston and the rest of the country with Blacks, Latinx and Asian populations having higher COVID death rates after adjusting for age. How did the pandemic affect school bus drivers? How did the union support its members?

The U.S. government declared COVID outbreak as a national emergency on March 13, 2020.  On March 5 itself, the union issued a comprehensive list of demands to safeguard the drivers, co-workers, the children and communities it served. The demands included free, on-site and unlimited COVID-19 testing; professional disinfecting of bus twice a day; safety training by medical professionals; and the employer Transdev to provide full protective equipment. Transdev is a division of the Paris-based transnational conglomerate Veolia, which employs over 1,70,000 workers in 104 countries and specializes in contracting with neoliberal governments to privatize water, waste, energy and transportation.

The union demanded the Boston Mayor's office to shut down the school system as drivers started falling sick from February 2020 onwards. Initially, there was a lot of resistance from the officials. The union independently started studying the safety protocols followed in China, invited medical experts to the union office to understand the steps to be taken to protect the members

When the emergency shutdown of schools began on March 17, 2020, we demanded full pay and benefits for the shutdown period. The first response was that we should apply for unemployment benefits like many other workers. The union had organized 11 strikes since its formation against several union busting private corporations that the local administration in Boston hired to run the public-school buses. The bosses knew that we would not accept anything less than full pay and benefits.

After a few militant demonstrations, Boston's Mayor had to relent and ordered the employer Transdev to sign the union’s full pay terms. The historic agreement included our union USW 8751’s solidarity commitment to Boston’s communities to provide our transport labour as needed. The city had to feed free breakfast and lunch to 50,000 school children and we delivered meals to their homes. We also delivered laptops to children for engaging in online learning. After the vaccination programme started in 2021, we were asked to go to designated centers for vaccination but we demanded that vaccination be provided at the bus yards so that vaccination would be possible for drivers who drive over 12 hours per day.

We lost a total of four school bus drivers to complications from COVID-19 and one lower-level management official as well. Our drivers have faced enormous hardships. They have had to dip into their retirement savings as their families and friends needed financial support.

In October 2013, you, along with three other union leaders, were fired under fabricated charges. All of you were reinstated in December 2015 after the charges were dropped. The strong union was able to withstand assaults from Veolia/Transdev. How did you do this and what are the lessons other fighting trade unions can draw from your experiences?

Earlier I talked about our current employer Transdev. We are the original 'privatized workers". Driving a school bus for public students should have made us city employees but that did not happen as the racist establishment did not expect the busing programme and the union to survive! In October 2013, the employer used fabricated charges of leading a wildcat strike to fire four leading elected union office bearers. Nevertheless, we received staunch support from the rank and file, who refused to be divided and re-elected us after we were fired. We had weekly pickets, monthly demonstrations and large numbers attending the court sessions.  The community of parents, teachers, students, other unions, respected African American former city councilors Charles Yancy and the late Chuck Turner, religious leaders Bishop Felipe Teixeira -a people's priest and the Workers World Party supporting us during the entire time. We have been working with the communities of colour for several decades around issues such as quality education and against systemic racism and they came to our support in times of need.

Your union has showed a lot of solidarity with Black Lives Matter (BLM) and other struggles against systemic racism for decades. You have also joined protests against U.S imperialist wars in Iraq, Libya to name a few and have showed solidarity with Palestine, Venezuela and Cuba. Could you talk about a few of these actions?

As I mentioned, more than 95% of our members are Black, the vast majority are from Haiti and have participated in struggles against exploitation and a small but significant section are from Cabo Verde, which fought Portuguese colonialism. It is our natural tendency to side with workers all over the world and show international solidarity as we understand who the common enemy is. Our union passed a resolution in solidarity with the rebellion against racism, police brutality and White supremacy. Many of us took part in the marches organized by Black Lives Matter and Justice for George Floyd campaigns. Our union showed solidarity with the Bolivarian revolutionary process in Venezuela and has opposed covert and overt interventions of U.S. The democratically elected President of Venezuela, Nicolas Maduro, was a bus driver like us and a union leader. We have not only opposed the U.S. military actions in Iraq, Libya, etc., in words but have consistently rallied on the streets. Local 8751 has been proud to express solidarity and publicize the historic occupations and strikes of Indian unions and farmers, which we also see as the way forward.

Your union has showed solidarity with Amazon workers who have been trying to organize in a few warehouses across the country with little success. What needs to be done for these super exploited unorganized workers to move forward?

Workers at Amazon's facility in Bessemer, Alabama recently waged a spirited struggle to form a union. However, they faced corporate terrorism on the shop floor resulting in a lost vote. Amazon spent millions of dollars bombarding the workers with anti-union campaign and fired several shop floor leaders. Our union was in solidarity with the Amazon workers in Alabama and held demonstrations during their unionizing campaign.  On June 24, 2021, International Brotherhood of Teamsters, a union that represents more than 1.3 million workers, overwhelmingly voted in favour of a special resolution: “Building Worker Power at Amazon.” This is indeed a very good step. Organizing workers at the world’s largest corporation run by the world's richest man will be a priority for the labour movement to move forward.

Finally, do you have anything to say to the working class comrades in India?

We, in the union, have been very inspired by the historic struggles of the farmers who are encircling New Delhi. We were very impressed by, perhaps, the biggest strike in history on Nov. 26, 2020, by more than 250 million Indian workers.

Our salutations to the brave women of Shaheen Bagh !  Solidarity Forever! 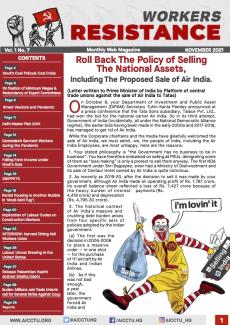