In Search of 'DigniTea': Plantation Workers of Assam 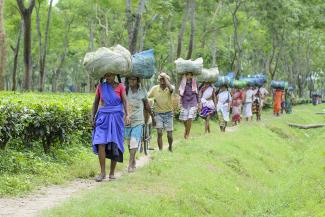 The mass-scale exploitation of tea plantation workers in Assam and across the country has been well documented over the years. Recently, certain orders of the Hon’ble Supreme Court and the One Member Committee constituted by the Court to look into the issue of pending dues of these workers, highlights even further the abysmal situation the workers are forced to survive in, and the wholescale violation of their statutory and constitutional rights.

The case in question arose out of a petition filed by the International Union of Food, Agricultural, Hotel, Restaurant, Catering, Tobacco and Allied Workers' Associations (hereinafter referred to as “Union”) before the Supreme Court in 2006 [WP(C) No. 365/2006], wherein it was claimed that plantation owners owed huge amounts in pending wages, gratuity, and provident fund to tea workers. It was contended by the Union that the Central Government had failed to take steps to recover the same from the plantation owners in terms of the provisions of the Tea Act, 1953.

It its Interim Order dated 30.04.2009, the Supreme Court had directed the concerned State Governments to ensure provision of work under MNREGA / Anganwadi Scheme, and to also ensure that if there was acute poverty, food was provided for free or at subsidized rates. Subsequently, in its judgment dated 06.08.2010, the Supreme Court disposed of the matter, while holding as follows:

“No steps have been taken under the provisions of Tea Act, 1953. The Tea Estates have been abandoned by the Tea Companies. The workers are left high and dry. They are living in a pitiable condition. They have not received their dues. Till date, several meetings have been held. However, there is no outcome. In the circumstances, we direct the Central Government to carry out their statutory duties under the provisions of Tea Act, particularly, in terms of Sections 16B, 16C, 16D and 16E within a period of six months from today.”

The provisions of law referred to by the Supreme Court in its judgment grant the Government the power to investigate into the situation of a tea undertaking / unit and to take over the same under certain conditions.

Unfortunately, the judgment was never complied with. Therefore, a contempt petition was filed for its violation [Contempt Petition 16 / 2012]. The Supreme Court, in its order dated 04.04.2018 found that “workmen, who worked for about 20 years have not been paid their wages. Their condition is pitiable and some of them have resorted to suicides. In some cases, these workmen are part of an unorganized Sector. In some cases, proceedings have been initiated by the workmen and in some cases by the Government for recovery of dues. The amounts have been locked in litigation and without any relief to the workers.” In respect of the State of Assam, it was directed that the necessary funds of rupees ninety-nine crores would have to be given by the State of Assam for disbursement to retired employees. It is pertinent to note that the State of Assam had submitted before the Supreme Court that there were over 16,000 retired workers and staff of the Assam Tea Corporation.

Even after the passage of one and a half years, the State of Assam had only disbursed Rs. 76 crores out of the Rs. 99 crores that it was directed to deposit. Therefore, a One-Member Committee was constituted by the Supreme Court to settle the claims of the workers, headed by the Justice Abhay Manohar Sapre, retired Judge of the Supreme Court (hereinafter referred to as Sapre Committee).

At this stage, the COVID-19 pandemic hit India. In this context, the Assam Sangrami Chah Sramik Sangha (“ASCSS”) affiliated to AICCTU, with more than 25,000 tea garden worker members, filed an application before the Supreme Court seeking payment of lockdown wages. The ASCSS relied on the circular dated 02.04.2020 issued by the Government of Assam directing all the plantation owners to disburse wages and ration to the plantation workers during the period of lockdown. It was noted that in several estates / plantations, workers had received no lockdown wages at all, and only some atta (flour) as rations. It was further stated that “The workers in tea gardens are in dire circumstances and are facing extreme poverty. The earlier reports from the tea gardens suggest many starvation deaths due to non-payment of wages. With the lockdown this situation will further aggravate and may put many lives at stake.”

The matter then came up before the Supreme Court on 18.01.2021, and the Court directed that the Sapre Committee should go into the claims made in the petition and pass appropriate orders specifying the exact amount that is due to the workmen.

Subsequently, the Sapre Committee passed an Order dated 02.04.2022 in respect of the dues of tea estate workers in Assam. The Order reveals the huge pending amounts due to the workers. For instance, the Management of Hautley Tea Estate, Golaghat District has over Rs. 4.3 crore due in interest alone on delayed payment of PF. Similarly, in respect of Hukanpukhuri Tea Estate, Tinsukia, pending gratuity and interest on gratuity of over Rs. 1 crore each are pending and almost 2 crore is pending in interest on delayed payment of gratuity. In Hukanpukhuri tea estate, there are 461 workers whose dues have been pending for years, but the Management has been given further time to pay off pending amounts in instalments due to the contention of the Advocate that the owner is in poor health and the quantum is large. The Sapre Committee has been monitoring and ensuring the payments of pending amounts in instalments and noting balance dues. The workers are yet to be paid their dues, pending now for over 16 years.

In respect of lockdown wages, the Sapre Committee had directed tea estate owners to submit their replies. The State of Assam stated that in respect of non-payment of wages, various authorities had been appointed, but no applications had been filed by the ASCSS before them. Hence, the Union was directed approach the relevant authorities within 30 days of the Order dated 02.04.2022, and the same were to be disposed off within 30 days from receipt of such applications by the Union/individual workmen.

In respect of crores of earned dues (in minimum wages, gratuity and PF) that were admittedly pending, the failure of the government is glaring and the intervention of the court is lacklustre. The non-payment of earned wages is nothing but literal wage theft by managements who earn in crores from workers and whereas workers only earn meagre minimum wages through their sweat and blood. While the intervention of Justice Sapre to ensure payment of decades old pending wages to workers is welcome, it is far from adequate. In fact, the Payment of Wages Act, the Payment of Gratuity Act and the Employees’ Provident Funds and Miscellaneous Provisions Act - all provide for prosecution and imprisonment of offenders.

Assam boasts over 10 lakh tea workers in the organised sector alone, working in about 850 big estates. The State of Assam produces roughly 55% of India’s tea, forming large portions of the domestic consumption and exports. However, the workers earn abysmal amounts, with even the minimum wage being placed at Rs. 205 a day (after a recent hike in May 2021), which workers are not paid by most tea estates. A report by Oxfam and IIT-Bombay has found that tea plantation workers in Assam get less than a fourth of the proposed living wage of Rs. 884. A living wage is the wage envisaged in Article 43 of the Constitution, which is the wage required to ensure a decent standard of life, dignity, and full enjoyment of leisure to workers. Often, there is a chasm of a difference between the minimum wage and living wage which is actually required for a dignified life. However, even with this glaring gap, even minimum wages have not been paid to the tea plantation workers of Assam.

The fact that the Government of Assam has denied thousands of workers the wages due to them is indicative of their contempt for the working class, and their commitment to silently permit burgeoning tea estates to continue exploiting workers in the name of business. The State’s lackadaisical approach to the payment of the workmen’s dues, its lack of compliance of the Sapre Committee’s and Supreme Court’s orders, are evidence of its betrayal of the working class. Tea plantation workers, forming part of the most vulnerable sections of the society in Assam, have toiled for decades for the State to be able to play host to the best quality tea and tourism in its tea estates. Workers, who have built the state to its present economic stability, and form the backbone of the industrial output of the State, are being deprived of their fundamental right to live with dignity. 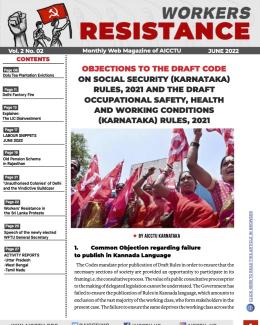 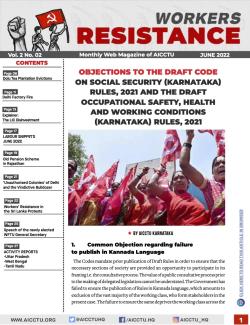