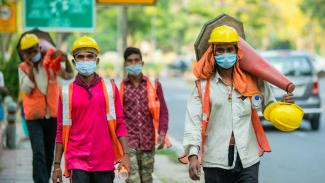 In this series, various changes sought to be brought in by the proposed labour codes are being discussed. It comes as no surprise that the Codes, brought in clearly show the corporate nature of the state. While issues such as the overbroad exemptions, the excessive delegation and the definitional changes have been discussed previously, this note considers the changing face of the grievance redressal machinery in the Industrial Relations (IR) Code.

This machinery, now contained in the Industrial Disputes Act, 1947, has its roots in the highly repressive Trade Disputes Act, 1929. We remember that in April 1929, Bhagat Singh and Batukeshwar Dutt had thrown smoke bombs in the Parliament protesting the 1929 Act. By 1947, the working of the colonial 1929 Act was found to be defective and the statement of objects and reasons of the ID Bill stated :

Experience of the working of the Trade Disputes Act, 1929, has revealed that its main defect is that while restraints have been imposed on the rights of strike and lock-out in public utility services, no provision has been made to render the proceedings institutable under the Act for the settlement of an industrial dispute.

The protections introduced in this Act were the result of a stated understanding that “industrial peace will be most enduring where it is founded on voluntary settlement” while recognizing the “obligation that lies on the Government to secure conclusive determination of the disputes with a view to redressing the legitimate grievances of the parties thereto”.

The ID Act is an imperfect law that provides some protections to workers while still not recognizing the full ambit of their rights in a self-proclaimed socialist country. However, having stood the test of time for over 70 years, it is now being sought to be repealed by the IR Code, which is blatantly anti-worker. The changes being brought in respect to the redressal mechanism are discussed here.

Limitation Period for Disputes and Removal of Reference System

At the outset, a major change that has been brought in is the introduction of a two year limitation period for raising a dispute before the conciliation officer, and a three month period for filing an application in the Tribunal after the conciliation report. This is significant in view of the settled law that in respect of reference of disputes, there is no limitation so long as the dispute subsists, though the court may mould the relief granted. Thus, the Supreme Court granted 60% backwages instead of full backwages in a particular case as a mode of “moulding relief” after a delay of 14 years.

The IR Code does away with the system of reference of disputes by the government to the Tribunal and Labour Court, and grants the workers three months to approach the  Tribunal after the report of the Conciliation officer. No provision for condonation of delay has been included. Effectively, a number of legitimate grievances of workers would be barred purely on grounds of delay.

Insofar as individual grievances are concerned, the Code permits the worker to approach the Tribunal directly from the conciliation officer after 45 days. This is not limited to cases of termination of employment as in Sec. 2A of the ID Act. However, this seems to lose its relevance in view of the removal of the entire reference system. Importantly, again the period of limitation for such direct approach has been reduced from three years in the ID Act to two years in the Code.

Changes in Judicial Set -Up

Under the ID Act, the Labour Court and the Industrial Tribunals consisted of a single member who was either a judge of the High Court/District Court. Through amendment in 2010, even a high level official with a law degree, at least seven years experience in the labour department including three years of experience as Conciliation Officer or an officer of Indian Legal Service in Grade III with three years experience in the grade would be eligible to be appointed as presiding officer.

As per the IR Code, a number of changes have been brought in to the judicial set-up:

Firstly, the Labour Courts are done away with and all matters would come before a Tribunal, except those that are referred to a national Tribunal. The Tribunal would now consist of a Judicial Member and an Administrative Member. No qualifications for appointment have been prescribed in the Code except that the Administrative member will not be below the rank of Joint Secretary.

Secondly, whereas the ID Act grants finality of constitution in respect of the single judicial member of the court/tribunal, the Code grants finality even to the appointment of administrative member. Therefore, the appointment of an Administrative Member cannot be called in question in any manner. It may also be noted that the disqualification of a member who is not independent has been retained in the Code, but "independent person" has been defined as “a person who is unconnected with the industrial dispute referred to a Tribunal or National Industrial Tribunal or with any industry directly affected by such dispute”. With this limited test of independence, and a bar on challenging appointment of members, there may be legitimate apprehensions about the bona fides, qualifications and suitability of an appointee.

Thirdly, and significantly, the Division Bench will sit jointly only in respect of five issues, being (a) the application and interpretation of standing order; (b) discharge or dismissal of workmen including reinstatement of, or grant of relief to, workmen dismissed; (c) illegality or otherwise of a strike or lockout; (d) retrenchment of workmen and closure of establishment; and (e) Trade Union disputes. In respect of all other disputes, the administrative member or Judicial member will sit singly. Some of these other matters would include, inter alia,

The propriety or legality of an order passed by an employer under the standing orders;

For all these matters, the administrative member is empowered to adjudicate alone. This is hugely dangerous and shift judicial power into executive hands, further blurring the separation of powers. This is especially concerning in view of the fact that the appointment of said member cannot be challenged.

In conclusion, it must be remembered that the industrial adjudication has been repeatedly used as a tool of social justice. As Justice Gajendragadkar held in 1962,

“The concept of social and economic justice is a living concept of revolutionary import ; it gives sustenance to the rule of law and meaning and significance to the ideal of a welfare state. It is on this concept of social justice that the formula in question has been founded and experience in the matter of industrial adjudication shows that, on the whole, the formula has attained a fair amount of success.”

Unfortunately, the plain text of the proposed Code shows not only dilution of protections available to workers but shows a disregard to social justice. This is not something new – with soaring social and economic inequality, the ruling dispensation has repeatedly adopted anti-people policies. We must take inspiration from the victorious struggle against the anti-people farm laws introduced by the Union government to equally ensure that the unconstitutional and anti-people Labour Codes are done away with. 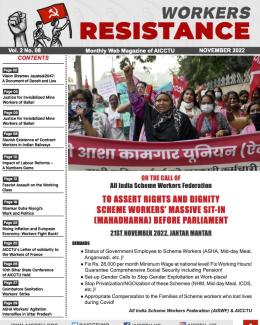 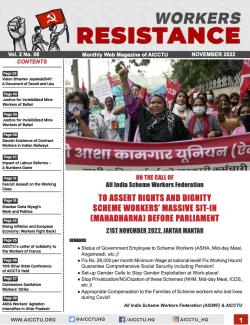